Welcome to River Raven. We are an IT solutions specialist in Malaysia with 15 years of experience in Cybersecurity, Hybrid IT, IT Consultancy, Virtualisation, Enterprise Storage & Systems and Business Continuity.

Ransomware in Malaysia- How to Protect Yourself Against Ransomware?

May 12th, 2017 saw the biggest ever cyberattack in Internet history.  A Ransomware named WannaCry stormed through the web, with the damage epicenter being in Europe. At the same time, Malaysia’s cybersecurity agency has issued an alert as the country emerged as one of the nearly 100 nations hit by a massive global cyberattack of Ransomware. Until May 24th, the infection has affected over 200,000 victims in 150 countries and it keeps spreading. 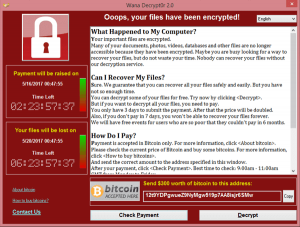 Ransomware is a type of malware that prevents or limits users from accessing their system, either by locking the system’s screen or by locking the users’ files unless a ransom is paid. More modern ransomware families, collectively categorized as crypto-ransomware, encrypt certain file types on infected systems and forces users to pay the ransom through certain online payment methods to get a decrypt key.

The virus gets into a computer when a user clicks or downloads malicious files. The user then gets a random demand which must be paid for access to be restored. Security experts, however, warn there is no guarantee that access will be granted after payment.

How Does it Enter the Systems? 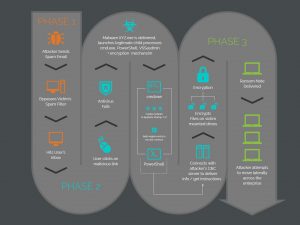 To amplify the victim’s distress, ransomware often includes a countdown clock with a deadline for paying the ransom – or else the decrypt key will be destroyed, eliminating any chance of recovery.

Paying the ransom often means the attacker will unlock the victim’s machine or provide the key to decrypt files. However, it rarely means the originating malicious binary, “ransomware.exe” in the case above, has been removed. That will require IT and SecOps support.

The attack doesn’t necessarily end there. Attackers often load additional malware on a user’s machine, allowing them to harvest personal information, intellectual property, and credentials to sell for additional revenue.

The Damage Caused by Ransomware 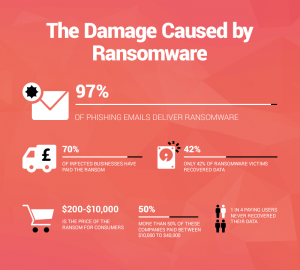 In 2015, there were numerous media and researchers stating that Ransomware was not all it is cracked up to be. Ransomware accounted for roughly USD 325 million in 2015, accordingly to Microsoft.

After a surge of attacks the following year, Cybersecurity Ventures predicted that ransomware damages and related costs would reach USD 1 billion annually in 2016.

According to the Cisco 2017 Annual Cybersecurity Report, Ransomware is growing at a yearly rate of 350%.

What Happens If You Don’t Pay the Ransom?

Typically one of two things: Either you restore your files from a backup, or you lose them forever. Hackers often give victims a deadline — say 72 hours to pay the $300 in bitcoin; after that, the price doubles. If the targets refuse to pay, their computers will be permanently locked- a serious problem for people who have not backed up their data.

How to Protect Yourself Against Ransomware?